Fire prevention is the idea to avoid fire triangle variables coming into contact with each other to initiate a fire. Once a fire starts, four variables are required to sustain the reaction to the combustion. Fuel, oxygen, heat, and chemical chain reactions are the four variables needed to sustain a fire. These four variables represent the fire tetrahedron. The fire tetrahedron is represented in the figure below. The chemical chain reactions are a result of the cycle of combustion. The chemical reactions ultimately produce combustion byproducts such as carbon monoxide, carbon dioxide, carbon, and other molecules, depending on the specific fuel. It is these byproducts of combustion found in the smoke that usually affect the safety and health of occupants and firefighters. Once a fire begins and is self-sustaining, the goal is to control and extinguish the fire. Fire extinguishment is done by eliminating one of the variables of the fire tetrahedron. By removing the fuel, oxygen, or heat, or inhibiting the chemical chain reactions, a fire can be extinguished. The fire protection concept assumes fires will occur and focuses on fire control by eliminating or otherwise controlling the fire tetrahedron variables. The concept of fire prevention is different from fire prevention because fire prevention tries to control the fire triangle variables before a fire occurs. 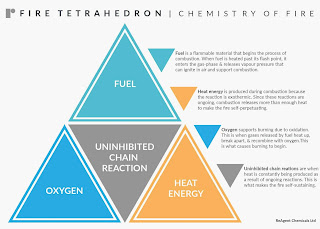 As mentioned, four fire extinguishing principles exist. They are highlighted below.

Controlling the fuel is accomplished by two methods. First, it can physically remove the fuel or separate it from the fire. For example, a fire containing wooden pallet stacks can be controlled by removing any exposed pallet stacks at a safe spot. Another example of this is the closure of a valve that feeds a gas or flammable fire. Second, the fuel can be chemically affected by diluting the fuel.

Controlling the oxygen requires that the oxygen be inhibited, displaced, or the concentration of oxygen be reduced below 15% by volume. Smoldering fires should be diluted to an oxygen concentration below 8% by volume. The oxygen supply to a fire can be inhibited by smothering the fire. Smothering fireplaces a barrier between the flame and the atmosphere. This can be done with a blanket or with the application of a layer of foam to form a vapor barrier. Displacement and reduction of oxygen concentration involve the application of inert gas to the fire, such as carbon dioxide. The carbon dioxide displaces the oxygen and therefore lowers the concentration to a level that is unable to sustain the fire. Applying an inert gas to fire requires that the fire be located in a confined space. Personnel must be aware that their ability to breathe is affected by the displacement of the oxygen or the dilution of the concentration. Fire extinguishment using this method requires that personnel be absent from the confined area or protected by self-contained breathing apparatus.

Inhibiting the chemical chain reactions requires that a chemical agent be introduced into the fire. Some chemical agents may tamper with the pattern of reactions by absorbing free radicals from one pattern needed for the next sequence to be completed. This capability is given by dry chemical extinguishing agents commonly used in portable fire extinguishers. 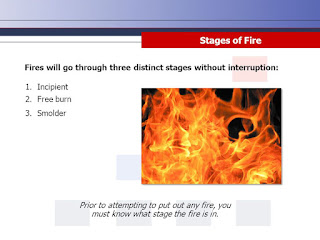 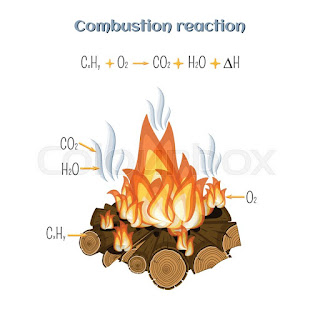 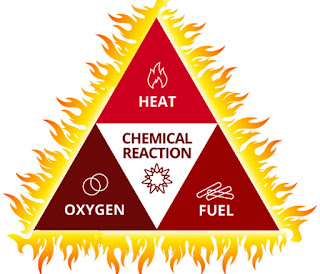